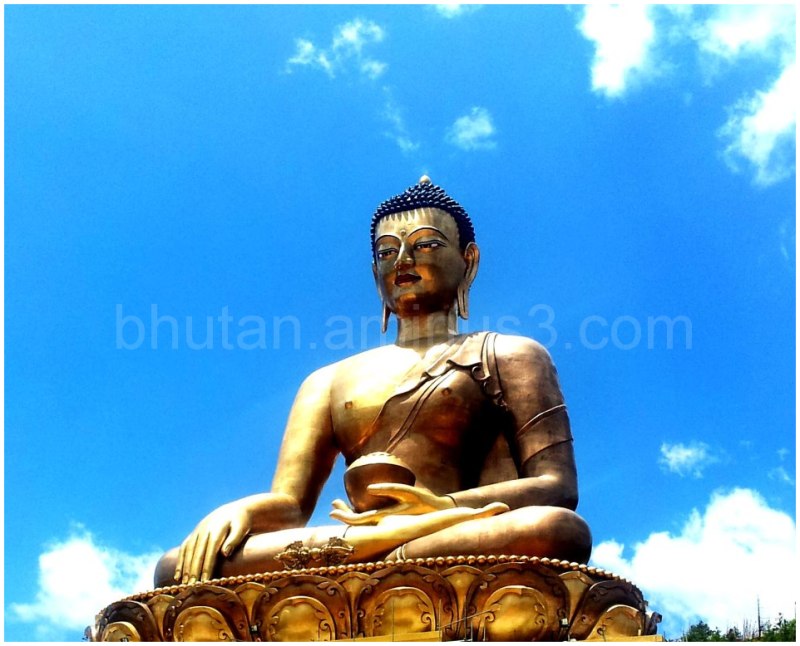 Buddha Dordenma is a gigantic Shakyamuni Buddha statue under construction in the mountains of Bhutan. The statue will house over one lakh (one hundred thousand) smaller Buddha statues, each of which, like the Buddha Dordenma itself, will be made of bronze and gilded in gold.[1] The Buddha Dordenma is sited amidst the ruins of Kuensel Phodrang, the palace of Sherab Wangchuck, the thirteenth Desi Druk, overlooking the southern approach to Thimphu, the capital of Bhutan. Upon completion, it will be one of the largest Buddha rupas in the world, at a height of 169 feet (51.5 meters). Although its completion was planned for October 2010,[2] construction is still ongoing as of December 2011.

The statue alone is being built at a cost of US$47 million, by Aerosun Corporation of Nanjing, China, while the total cost of the Buddha Dordenma Project is well over US$100 million. The interior will accommodate 100,000 8-inch-tall and 25,000 12-inch-tall gilded Buddhas respectively. Names of sponsors will be displayed in the meditation hall which forms the throne of the Buddha Dordenma.

Apart from commemorating the centennial of the Bhutanese monarchy, it fulfills two prophecies. In the twentieth century, the renowned yogi Sonam Zangpo prophesied that a large statue of either Padmasambhava, Buddha or of a phurba would be built in the region to bestow blessings, peace and happiness on the whole world. Additionally the statue is mentioned in the ancient terma of Guru Padmasambhava himself, said to date from approximately the eighth century, and recovered some 800 years ago by terton Pema Lingpa.

Under the eyes of the Buddha statue, the Kuenselphodrang nature park was formally opened as a recreational park in 2011. The park conserves 943.4 acres of forest area that surrounds the Buddha Dordenma statue.
Source: http://en.wikipedia.org/wiki/Buddha_Dordenma_statue